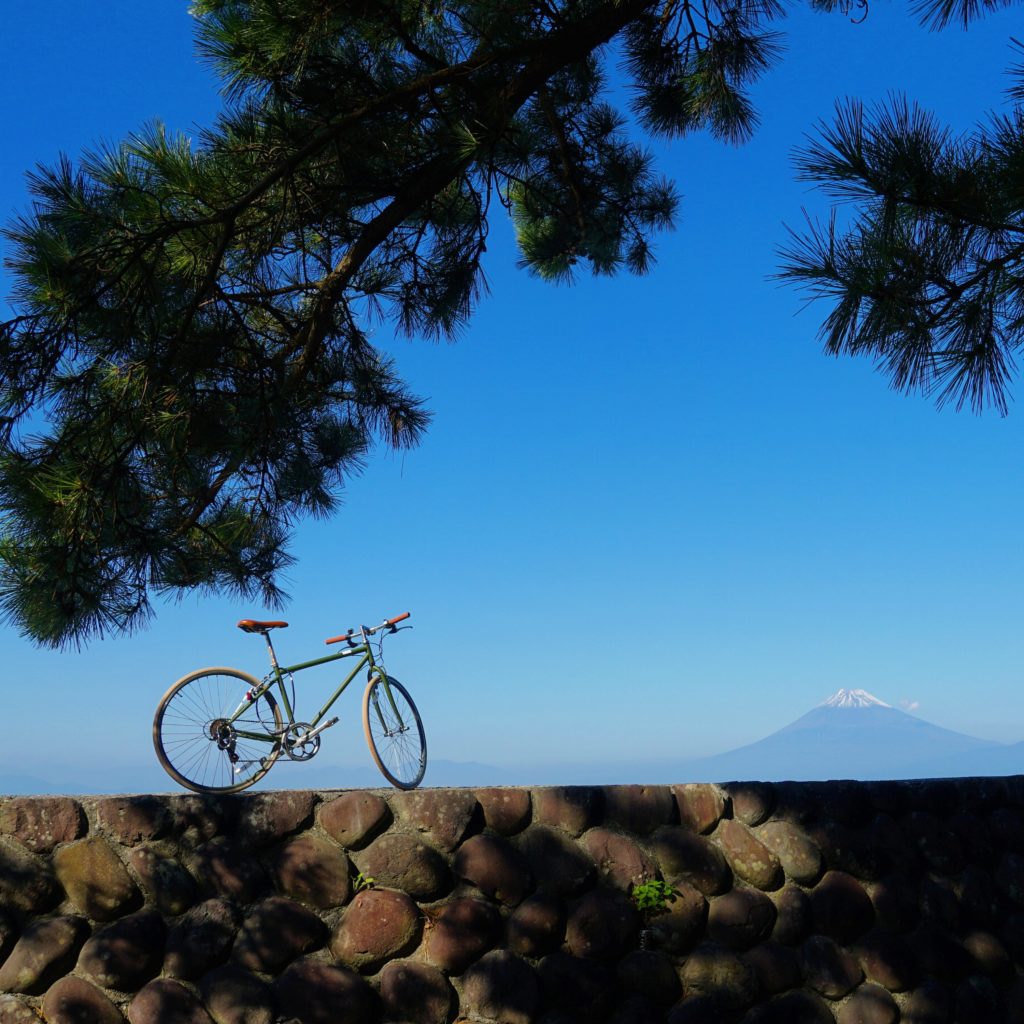 One of my favorite places in Japan so far.

Although historically of quite some significance (the first western style sailing ship was build here, commemorated by a small museum next to the lighthouse), years of bleeding out it’s population, young people moving to the cities and the older generation fading away, led to a lot of abandoned buildings, even ones with magnificent views of the harbour bay, sea and Mount Fuji looming over the horizon – made of the pine pensinsula and it’s toori gate.
This also makes the place so special in my eyes, adding to the calm and laid back atmosphere of town. You are tempted to just sit and watch how live and nature unfolds during the day. Though the younger generation mostly left for Tokyo, there is still a bit left in regards to culture and society. You have the one charming Onsen in the center of town, a group of people waiting in line in front of it in the morning sun. A public footbath where some of the tourist that came to fish have a chat with the locals, next to it a small place where you can get your Udon bowl for breakfast, after having spent the night at the Michi no Eki, the whole scenery nestled in between the ever present Izu mountains, who’s never fading green is one of the dominating colors where ever your eye turns.

So the overal charm of the place remains even with loosing most of it’s populace. It’s the old fishermen chatting at the harbour surrounded by the local cats when a boat full of catch arrives, or the general calm atmosphere of these small japanese towns. Especially outside the high season in summer, when the beach is not busy, there is no traffic to speak of and from every angle it feels like looking at a painting of aging Japan. It’s not a one way street though. Also things are changing in the opposite direction. Recently opened, the Tagore hostel draws people from all over the world to this remote location (there is no train connection). None of who I met here has been untouched by this place and it’s magic.

And magic it is allready when you tour around the bay that makes out the natural harbour of Heda Town. In clear weather, once you circled it half way, you are treated with a splendid view of Mount Fuji, throning over the horizon like in a Hokusai painting. With a rental bike from the hostel it’s easy to explore the whole area, be it the bay and it’s pine tree covered peninsula, featuring a beach and the museum looking at the local history and the deep sea rift, just off the coast, being know as the deepest coastal waters of Japan.

The few remaining shops in the harbour offer the fishing harvest from those deep sea depths just of shore, be it giant crabs or the odd squid that you can also watch the locals fish for at night. Especially in late fall the weather tends to be quite nice down here, south of Mount Fuji. The summer rather has the usual cloudy humidity and heat, sky and sea becoming one in the distance and Fuji-san only visible for seconds, if at all.

On top the whole eastern Izu coast is a really beautiful area for several activities, not to swamped by tourists due to it’s lack of a train connection, in clear weather always offering that postcard Mount Fuji view.

There is a decent Michi no eki in town with a nice little restaurant, that opens quite late in the morning though. The Michi no eki also features the local onsen (no private baths available) and a public footbath.

There is no convenience store closeby, next one probably 30 minutes drive away along the coast, but there is a small supermarket along the main road at the harbour. No ATM working with foreign cards either.

Parking is free at the harbour. In high season in summer the peninsuala is busy with summer guests at the beach though and a few hundred yens parking fees are charged then when you park in that area.

The Tagore Hostel is a good option as a base. It’s central to town has nice lounge space inside and outside. You can rent bikes here for a tour of the area. You can get a decent coffee, breakfast, snack, dinner, beer. Good place to socialise and if you are tired of sleeping in the car you can get room for a reasonable price. They take credit cards.

Where to go next:

Did you enjoy the article? I’m happy about feedback, referrals as well as any inspiration you took from it.

Would you like to give something back? Sponsor a coffee: ☕️

This website uses cookies to improve your experience while you navigate through the website. Out of these, the cookies that are categorized as necessary are stored on your browser as they are essential for the working of basic functionalities of the website. We also use third-party cookies that help us analyze and understand how you use this website. These cookies will be stored in your browser only with your consent. You also have the option to opt-out of these cookies. But opting out of some of these cookies may affect your browsing experience.
Necessary Always Enabled

Any cookies that may not be particularly necessary for the website to function and is used specifically to collect user personal data via analytics, ads, other embedded contents are termed as non-necessary cookies. It is mandatory to procure user consent prior to running these cookies on your website.