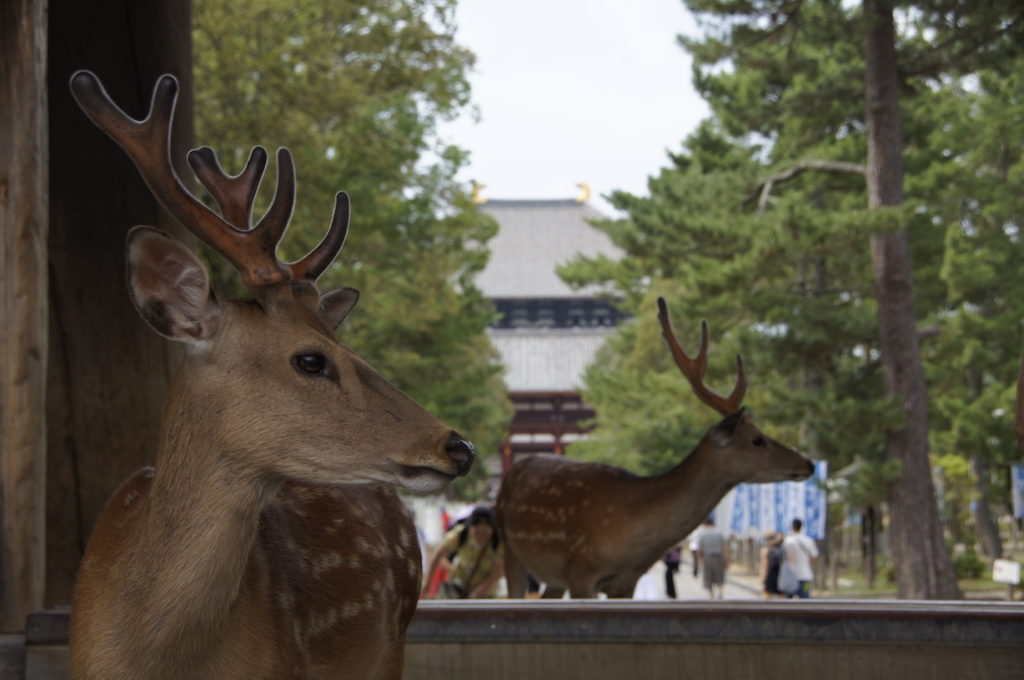 Nara is one of the many UNESCO World heritage sites in the Kansei region of Japan. Any tourist visiting Kyoto should take the short trip south to the ancient capital of Nara. Not only will he be rewarded by sights like the eight major temples that make up the center of town – everybody visiting is going crazy over the deer that populate Nara Park and will follow your every step in hope of some food. 😍 Kawaii!

I also went to Nara as a sidestep from a Kyoto visit. Curious about the deer and about the famous Todai-ji – aka Big Buddha. It took me only about 45 minutes by car to cover the 50 kilometers between the two cities. There is convenient, not too expensive parking (500 yen a day) in Nara Park, from where the area can be explored on foot.

Right at the parking lot you are welcomed by these little fellas:

According to legend, the god who founded Nara, rode to the place on a white deer. Thus, the more than thousand deer that roam the inner city and Nara Park, are seen as holy and the protectors of the city and its people.

One of the highlights of the UNESCO World heritage site is the Todai-Ji temple, featuring the largest bronze Buddha statue in the world. The temple itself is more than 1200 years old. It was rather surprised by its size, as it is quite impressive compared to other temples in Japan. (It is still though 30% smaller than its previous version, that burned down in the 1700s.) I guess a big Buddha needs a large house. 🤷‍♂️

A lot of major temples and shrines in Japan feature a miniature version of themselves on display inside. These miniatures are often as old as the temples and are of meticulous detail. They represent a piece by piece copy of the building, in order to have a blueprint to rebuild from when needed. All the big temples in Japan are taken apart and set up again every 30 to 50 years, like a big LEGO set, weak or broken parts being replaced during the process.

Parking: I always go for the central parking lot as I never stayed over night.

Where to go next:

Did you enjoy the article? I’m happy about feedback, referrals as well as any inspiration you took from it.

Would you like to give something back? Sponsor a coffee: ☕️

This website uses cookies to improve your experience while you navigate through the website. Out of these, the cookies that are categorized as necessary are stored on your browser as they are essential for the working of basic functionalities of the website. We also use third-party cookies that help us analyze and understand how you use this website. These cookies will be stored in your browser only with your consent. You also have the option to opt-out of these cookies. But opting out of some of these cookies may affect your browsing experience.
Necessary Always Enabled

Any cookies that may not be particularly necessary for the website to function and is used specifically to collect user personal data via analytics, ads, other embedded contents are termed as non-necessary cookies. It is mandatory to procure user consent prior to running these cookies on your website.